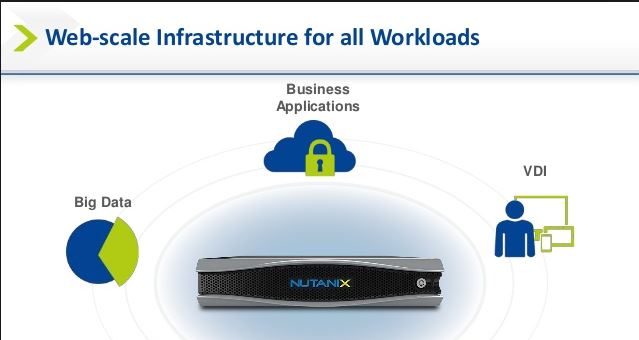 Nutanix works on milestone millionaire concept that is called “Web-scale Infrastructure concept” Nutanix was found in 2009 by Mr. Dheeraj pandey to simplify the three tier infratructure complexity (compute, storage and networking).
The huge question was how to sort out this issue ?
What kind of technology concept can resolve this issue forever ?

The answers was hidden in web-scaling over the internet, websites ever rapidly increasing and scaling out volume day by day without any disruption.
So, Nutanix developed extraordinary intelligent Acropolis operating system ( AOS ) that works on web-scale infrastructure concept along with hyper converged technology.

What is Web-scale : Web-scale is a new architectural approach to infrastructure and computing to push the limit of expansion of infrastructure to adding nodes without any downtime as web expanding itself over the internet day by day.

There is four constructs ( Pillars ) to build up web-scale infrastructure

Software defined intelligence is core logic from any normal or proprietary hardware feature(s) or function, develop in software defined to minimize the hardware dependency to do the same work. example : storage array was handled by RAID hardware card but now it is software defined to handle storage functions.
In Nutanix controller VM (CVM) is the software defined storage data plane that handles storage I/O and data management, storage performance etc.

Traditionally, vendors have assumed that hardware will be reliable, which, in most cases can be true.  However, core to distributed systems is the idea that hardware will eventually fail and handling that fault in an elegant and non-disruptive way is key.

Distributed systems are designed to accommodate and remediate failure, to form something that is self-healing and autonomous.  In the event of a component failure, the system will transparently handle and remediate the failure, continuing to operate as expected. Alerting will make the user aware, but rather than being a critical time-sensitive item, any remediation (e.g. replace a failed node) can be done on the admin’s schedule.  Another way to put it is fail in-place (rebuild without replace) For items where a “master” is needed, an election process is utilized. In the event this master fails a new master is elected.  To distribute the processing of tasks MapReduce concepts are leveraged.

Incremental and linear scale out

Incremental and linear scale out relates to the ability to start with a certain set of resources and as needed scale them out while linearly increasing the performance of the system.  All of the constructs mentioned above are critical enablers in making this a reality. For example, traditionally you’d have 3-layers of components for running virtual workloads: servers, storage, and network – all of which are scaled independently.  As an example, when you scale out the number of servers you’re not scaling out your storage performance. With a hyper-converged platform like Nutanix, when you scale out with new node(s) you’re scaling out:

Benefits of Incremental and linear scale out

After reading out the Web-scale infrastructure concept completely, you can understand the strength of it, that’s why i used two words ” milestone millionaire ” in beginning of the blog that made the Nutanix world’s number #1 hyperconverged leader.
If you something to ask please mentioned in comment.!

Thanks to being here.!